Around the Sound for Horizons Childrens Sailing Charity 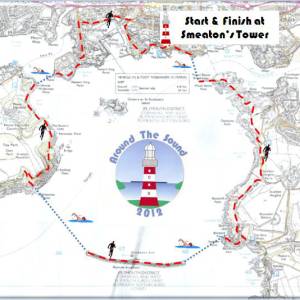 Stephen and Gill from Boatshed Plymouth are pleased to support the Horizons Children's Sailing Charity which is based in Plymouth.

"Our aim is to help disadvantaged and disabled children from Plymouth and surrounding communities by providing opportunities that increase self-confidence, improve social and practical skills through the experience of water-based activities, that would normally be beyond their means."

As part of our support for Horizons we have sponsored Eric Whitley in his crazy fund-raising attempt – “Around the Sound” and we encourage others to do the same.

AROUND THE SOUND
An unsupported, solo attempt to run and swim non-stop around Plymouth Sound, crossing the Tamar and Plym river entrances, and both West and East entrances to The Sound on Sunday 12th August 2012.

Starting and finishing at Smeaton's Tower on Plymouth Hoe, Eric will first run to Devil's Point in Firestone Bay and take to the water to cross the very tidal 'Narrows' - the narrow entrance to the river Tamar where the current can run at over 6 knots.

From the opposite shore at Wilderness Point in Mount Edgcumbe Country Park the next running route takes Eric to Fort Picklecombe where he will take to the water to cross the Western entrance to Plymouth Sound to Plymouth Breakwater, dodging any ships that might be approaching or leaving Plymouth!

Eric will run the length of the Breakwater, by permission of the Queen’s Harbour Master, then swim across the Eastern entrance to Fort Bovisand.

From 'Bovi' the next running leg is around Jennycliff Bay to Mountbatten Breakwater pier, from where he will swim the relatively short crossing of the entrance to the Cattewater (River Plym) to Plymouth Royal Corinthian Yacht Club and then a hop and a skip back up to Smeaton's Tower.

Please support this very worthwhile charity and make your donation by clicking the link.