Boatshed Brighton
Circumnavigating the UK in a Leisure 27, Part 3 - Ramsgate to Harwich
Monday, 21 May 2018

Circumnavigating the UK in a Leisure 27, Part 3 - Ramsgate to Harwich 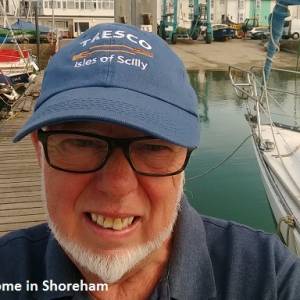 After the high winds and thunderstorms of yesterday, Sunday dawns overcast but the wind had eased. The next leg across the Thames Estuary to Harwich, will take 8 hours but there is no point of an early start since the tide will not become favourable until 1100.

Crossing the Thames Estuary in a northerly direction means cutting across the main commercial shipping channels and the long sandbanks which run from a south west to north east direction.

The pilot books warn of the dangers of running aground on the hard sand and emphasise the the speed at which, commercial shipping can appear in the channels, especially from behind!

So I make a detailed passage plan marking the important turning points at buoys which have ominous names like Black Deep 2 (I never did find Black Deep 1) and Sunk.

Not a sign of life
The sea is flat calm progressing up towards the white cliffs of North Foreland, under engine and mainsail. Two pilot boats hurry past on their way to the River Thames. Away to the right the skyline seems filled with wind turbines.

From then (10.15) until 16.15 arrival at Harwich, I do not see a single yacht, fishing boat, tanker, cruise liner. Not a living soul! The weather is overcast and it eventually rains hard but the sea stays flat calm. It is an extraordinary experience.

Dark Star seems hemmed in on all sides by wind farms, but not a single turbine blade was turning.

Being out of sight of land can be disorientating and you rely on the compass. However with the tide now running fast to the north, when I turn to cross a channel in the sandbanks, the boat is pushed sideways quite disconcertingly!

It's a long day, but eventually the giant cranes of the container port at Felixstowe rise unmistakably on the horizon and I count the buoys as I skirt the outside of the deep shipping channel to make a cautious entrance.

It's growng dark by the time Dark Star enters the lock at Shotley Marina, directly across the harbour from Harwich and Felixstowe. Booking in formalities completed, it is hard to pass the nearby yacht club with the promise of a celebratory pint and to renew contact with humans.

It's nearly 21.00 and the place is closing up, but the offer of scampi, peas and chips is readily accepted. Ugh, not very nice, but it filled a hole and the free WIFI password is "shipwreck"...

Oh no! The wind has turned to the North, right on the nose and even worse the tide willl be running against the wind -not comfortable. I decided last night to stay in the river Orwell till the wind changed before making the 40 mile trip to Lowestoft.

However by morning the wind does not seem too bad and I feel a bit of a "woose".

So all preparations are made to leave, course plotted, waypoints entered, fuel and water taken, sandwiches prepared, flask filled etc.

A local yachtsman chances by and I mention that I am off north to Lowestoft. "It will be a hard slog with the wind on the nose, mate".

Just then a gust of wind blows away what remained of my faint resolve. And so I find myself on the little ferry plying from Shotley Marina over the harbour to explore the great city of Harwich.

More strong wind warnings, wind straight from the north and forecast to stay there for several days. However, there appears a window on Wednesday and Thursday for Lowestoft.

Lowestoft is the most easterly point in England but here the chart system changes from England east to England north east, with Berwick on Tweed at the top.The next chart system is Scotland although at present rate of progress, that seems a long way off!

Some have queried why a 40 mile trip seems such a big deal in a small sail boat. Basically its all about speed. Dark Star cruises at an average of 5 nautical miles per hour.

So in eight hours Dark Star covers 40 nautical miles. Your car cruises around 60 mph and in 8 hours you could drive 480 miles. So an eight hour, 40 mile sea trip is the motoring equivalent of a journey from Edinburgh to Brighton and the boat is moving constantly up and down and from side to side.

Sailing up the East coast requires several 40 mile trips (sometimes further) due to the relatively few all-tide harbours. There are some smaller harbours but they dry out as the tide falls.

When sailing north, you are moving with the falling/ebbing tide. Once past Grimsby, the ports are better spaced and it should be less of a slog.

Back to the activities of Tuesday 24th. The River Orwell runs north west from Felixstoweand HarwichYou you can sail nine miles right up the river to the city of Ipswich

In the breezy north easterly winds, the river Orwell provide a lovely sail on a beam reach. Engine off, sails at full stretch on flat, sheltered waters, it is very relaxing. It's amazing how quickly the giant container port of Felixstowe soon gives way to a completely rural setting of mixed woodland and pastures.

Returning down river, there is the option of staying overnight in the Suffolk Yacht Harbour at Levington but it lies a couple of miles from the harbour mouth and a morning departure will mean plugging into a stiff incoming tide.

So it's back to Shotley marina for the night to prepare for the 45 mile trip to Lowestoft.

The wind is from the north west and on the nose all the way to Lowestoft. However it never varied from a Force 3 or 4 and with just the mainsail up, the engine does most of the work.

Leaving at 1100, the first two hours against the tide are slow, just 3 knots, but once the tide turned, 7 knots are soon on the log. We sweep up past Orford Ness, Aldeburgh, Southwold and Sizewell Nuclear Power Station.

I think that's the third nuclear plant on the trip plant so far, folllowing Dungeness and Bradwell.

On phoning ahead to the marina in Lowestoft (the Royal Suffolk and Norfolk Yacht Club)Wellsrevealed a very attractive, traditional little seaside port.

Even better, less than half a mile away a new Coop supermarket has just opened - a godsend for the sailor running low on supplies after 11 days afloat.

In the other direction there is grand 3/4 mile walk on a raised walkway down to the harbour entrance where the view from the Coastguard lookout confirms the tortuous nature of the entrance "channel".

A relaxing day finishes with fish and chips from Frenche's whilst watching England V Australia on the TV. Yes, there is one aboard.

A lovely day of sunshine with a cool breeze. Wells is a charming spot and should be full of visiting yachts. However the nearest port to the north is Grimsby 45 miles away and to the south, Lowestoft is some 60 miles.

It's a full day's sail from either port, ending with a drying harbour and tricky entrance to negotiate. The result is uncrowded and quiet moorings for those visitors who do make it.

So far over 250 miles have been covered in 10 days but that good run will end here for the time being. The problem is that exit from Wells is limited to two hours before/after high water.

The forecast for Sunday/Monday is not good. By Tuesday the high tide is close to 15.00. Leaving at that time, the next 45 miles to Grimsby would take 9 hours and involve sailing in the dark from 2100 to 24.00.

Sailing in the dark in proximity to the coast is unwise for the single handed sailor due to the number of fishermens' nets, pot buoys, lobster traps. Getting caught in these nets or ropes is to be avoided at all costs.

Professional fishermen mark their gear with flags which are clearly visible by day, but not at night.

However there are many part time cowboys who put down gear without marker flags, just plastic containers or small buoys which are almost impossible to see, even in best daylight, especially when a strong tide pulls them below the surface.

I might be stuck in this nautical paradise until leaving on the early 06.00 tide on Thursday June 2. Four more days of lazing around!.

Furthermore the new "facilities" block on the pontoon is excellent and the harbour free wifi turns out to be the best encountered on the whole way around Britain.

Today after lunch of fresh prawn and crab salad and a large glass or red, eaten in the sunny cockpit, I fall fast asleep. The stress of it all is just about bearable.

The next 250 miles should take me close to Aberdeen - well when I get started again.

Thanks for reading this. 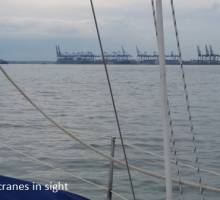 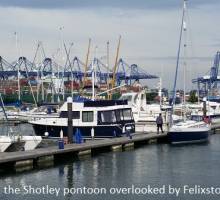 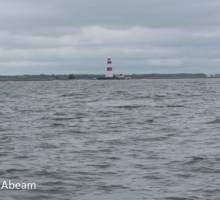 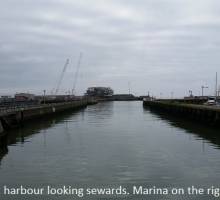 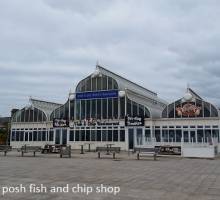 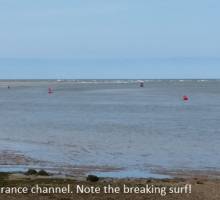 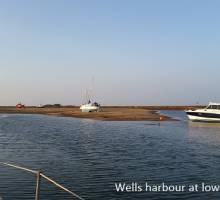 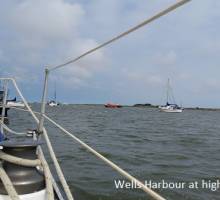