Plymouth’s historic Sutton Harbour will be hosting the famous tall ship, Kaskelot, when it returns to the city in August for a month-long visit.

The three-masted barque, which is one of the largest wooden tall ships still in commission, will be sailing into Plymouth during the first week of August and will be moored alongside Quay Road in Sutton Harbour.

During its four-week stay in Britain’s Ocean City, Kaskelot will be lowering its gangway for a series of open days where the public are invited to come on board and explore the historic vessel.

Kaskelot previously visited Plymouth for three weeks in May 2017, which saw the vessel transformed into an outdoor cinema during a two-day film event as well as hosting a craft market and school workshops, and again back in 2015 where it attracted huge crowds to the waterfront.

In addition to hosting the popular open days and film screenings throughout August, Kaskelot will be running workshops and training days for people who are interested in sailing and the marine industry.

There will also be an opportunity to hire Kaskelot to host corporate events and private functions on board with more events to be announced over the coming months.

Jessie Atkinson, Ship’s Manager for Kaskelot, said: “We are very excited to be bringing Kaskelot back to Sutton Harbour. The ship always receives a fantastic welcome in Plymouth, and we are working on an exciting schedule of events, workshops, screenings and open days for our stay there.

“It’s a real highlight for us to be able to share Kaskelot with a wide variety of different groups, and hopefully there will be something for everyone to enjoy during our time there.”

Kaskelot was originally built in Denmark in 1948 and worked as a support vessel for Danish fisheries in the Faroe Islands. More recently the beautiful barque has become famous having appeared in many hit Hollywood films and TV dramas such as Cutthroat Island, Longitude and David Copperfield.

Mark Brimacombe, Marina Manager, said: “It is always wonderful to have Kaskelot moored in Sutton Harbour. The sight of a beautifully restored traditional wooden ship brings Plymouth’s maritime history to life for many of our visitors.

“Kaskelot has been immaculately restored making her one of the finest wooden tall ships still in commission and we are excited for the public to be able to climb on board and learn about this historic ship.”

The post Famous tall ship plans a return to Plymouth’s historic Sutton Harbour appeared first on All At Sea. 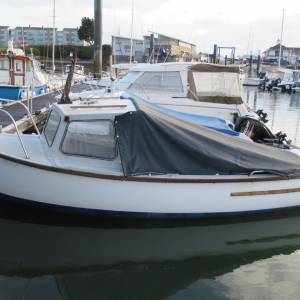