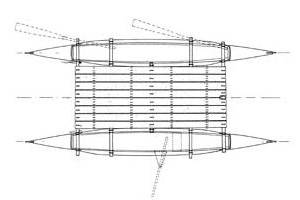 Boatshed Plymouth is pleased to have listed a Wharram Tiki 26 catamaran at an asking price of £6,950. The Tiki 26 was designed for those who want to do more serious coastal cruising. She can be trailed and easily beached (to step off in ankle-deep water); sleeps two in the hulls, leaving room for a small galley and chart table but accommodation can be increased with a deck tent, giving space for double bunk. Her ocean-going abilities have since been proven in various ocean crossings.

In the mid 50's, based on his research into ancient Polynesian boat design, James Wharram built the
first off-shore catamaran in Britain and sailed it out into the Atlantic. While the world's yachting
community was busy dismissing such a design as a worthy sea-going vessel, James was landing
his 23'6" 'Double Hulled Canoe' in the West Indies. There he built a second 40' Polynesian style
catamaran and sailed it back to the UK, accompanied by two young German girls, being the first to
sail a catamaran across the North Atlantic.

The quality of the Wharram self-build catamarans is reflected in their popularity, excellence of
craftmanship and 'sound sailing qualities'. 50 years on, with 10,000 sets of plans sold and
thousands turned into proud vessels. Wharram 'Cats' can be seen in harbours across the world
maintaining the highest reputation for surviving wind and wave.

James Wharram is a “hands-on” designer, having personally built many of the prototype designs over his lifetime. These prototypes were built in the open, in barns, workshops and all range of building sites available to self-builders, in a variety of climate types from northern European to the Tropics. Because James prefers sailing to building, he has always endeavoured to refine his construction methods to their simplest form, following the famous Bauhaus motto “Less is More”. The advent of epoxy in boat building in 1980, combined with a Wharram-evolved Stitch and Glue method, opened up new ways of achieving this aim. Together with Hanneke Boon, he has developed many new Appropriate Technology building methods. Of special note are the lashed crossbeams and the Wharram Wingsail Rig. (Whether you see the Tiki sail as an old fashioned gaff sail or a new evolved soft wing sail is a matter of dispute. What is not in dispute is that over 2,000 of this type of craft, including many larger ocean sailing ones, have used developments of the original Tiki 21 sail rig. No new or old sail rig has been used on so many craft or been so widely tested.)
“A philosophic attitude behind the Wharram designs is that "urban man" can, with a little financial saving and some handcraft work, create an object of beauty. This object of beauty can then, for a period of hours, days, weeks or months, carry him/her out of the urban world into a natural never-never land; the seas and oceans; to a time when the world was young; when Mankind was directly and intimately interacting with the beauty and power of nature. There are hundreds/thousands of Wharram builders or, as I prefer to call them, "Sea People", who have done or are now doing that!"
James Wharram”

So, if you feel you might want to take a look at a catamaran, designed by the legendary James Wharram, don’t hesitate to call us at Boatshed Plymouth on 01752 426106.