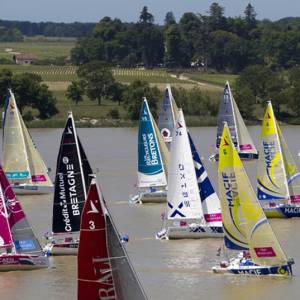 Plymouth’s Sutton Harbour will host some of the world’s top sailors when the 45th edition of La Solitaire du Figaro arrives in the city this June. It’s considered to be the world championship for single-handed yachtsmen and yachtswomen, one of the main training grounds for the famous Vendee Globe race.

It’s the first time the month-long, four-leg race has ever been to Plymouth. Around 45 sailors, all on identical 33ft boats, will arrive in Sutton Harbour at the end of Leg 1 on Wednesday, 11th June.

The course and stopover ports change every year. In 2014 the race will start in Deauville in Normandy before crossing the Channel to Plymouth. From Plymouth the fleet will race to Roscoff, then make their way down the West coast of France to Les Sables d’Olonne in the Vendee region before finishing in Cherbourg.

Thousands of people are expected to line Plymouth’s waterfront when the Solitaire fleet leaves on Saturday 14th June.

The sailors will begin Leg 2 with a race inside the breakwater, an incredible spectacle with 45 boats racing between Jennycliff, Mount Edgcumbe and the Hoe.

Following the success of the America’s Cup in 2011 it’s hoped the Solitaire du Figaro will reinforce Plymouth's position as Britain's Ocean City and one of the leading sailing destinations in Europe, if not the world.

You might not be able to buy one of these amazing yachts but Boatshed Plymouth have a great selection of other yachts and motor vessels for sale. 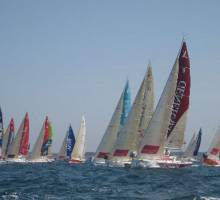