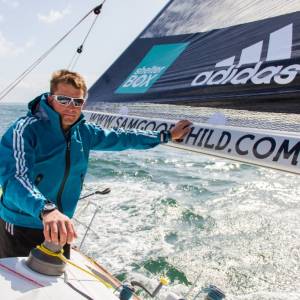 Sam is a young British sailor from the South West pushing to make it into the world of short-handed offshore racing.

After 2 years with the Artemis Offshore Academy, Sam has started his own Figaro campaign to carry on building his experience on the road to the 2016 Vendee Globe.

In 2013 Sam achieved the best British Figaro result in 38 years with an 11th place in the Solitaire du Figaro. Next he will join Team Concise for another stab at the Transat Jaques Vabre race.

At only 23 years old, Sam Goodchild is not shying away from his bold ambition to compete in the race that made Ellen MacArthur a household name. Sam is a promising British rising star in the short-handed offshore racing world. "Promising has a meaning... and as far as I am concerned it means I have to deliver. If anything it motivates me to work even harder and to prove that the people who see potential in me are right."

Weeks after being born in Bristol he flew across the Atlantic to live on a sailing yacht with the rest of his family. They lived on the boat for 8 years, based mainly in the Southern Caribbean and then eventually settling down in a house in Grenada in 1999. After Hurricane Ivan devastated Grenada in 2004, Sam moved back to boarding school in the UK where he finished off his GCSEs and then A-Levels.

Back in the UK, Sam started taking his racing a lot more seriously and began with some dinghy sailing and then some Match Racing where he became the UK RYA Youth National Match Racing Champion in 2008.

Sam has a real sense of adventure and could never really keep away from the long distance offshore trips and managed to rack up 5 Atlantic and 1 Pacific crossings, the RYA Yachtmaster Ocean Qualification, completed the double-handed race around Britain and now has over 35,000 offshore miles.

Sam is putting together Team Plymouth and of course here at Boatshed Plymouth we are very pleased and happy to offer Sam our support and very best wishes for the upcoming Solitaire du Figaro. The race fleet will be arriving in Plymouth on Wednesday 11th June at Sutton Harbour and then will commence Leg 2 with racing in Plymouth Sound.